Greetings! I would like to welcome everyone to the Art of Ninzuwu blog page. If this is your first time visiting us, please take this opportunity to review some of our previous articles. We would like to wish each and every one of you all the best in your physical cand spiritual endeavors. Have a great day!

Today, I was started deconstructing one of my old blogs about Ninjutsu. One of the great gems in my martial journey thus far, has been my experience with Jeff Christian. I conducted an interview with him back in 2010 and I thought many of our Art of Ninzuwu readers and subscribers would enjoy reading it today.

“If an expert in the fighting arts sincerely pursues the essence of ninjutsu, devoid of the influence of the ego’s desires, the student will progressively come to realize the ultimate secret for becoming invincible-the attainment of the mind and eyes of god….The vast universe beautiful in its coldly impersonal totality, contains all that we call good and bad, all the answers for all the paradoxes we see around us. By opening his eyes and his mind, the ninja can responsively follow the subtle seasons and reasons of heaven, changing just as change is necessary, adapting always, so that in the end there is no such thing as surprise for the ninja.”- Toshitsugu Takamatsu 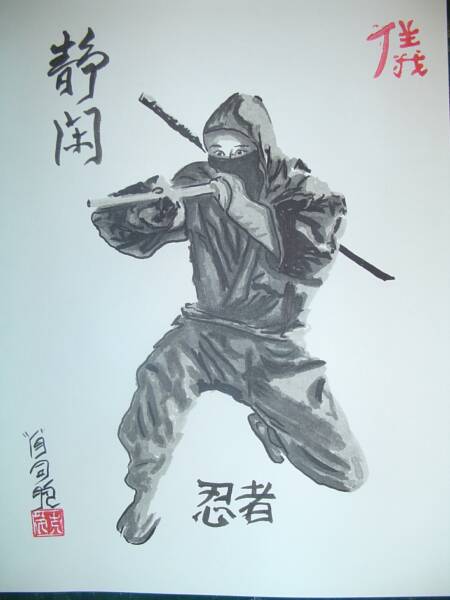 Path of The Dark Knight

One of the greatest spiritual paths in the world is that of martial arts. In famous work, written by D.F. Draeger, entitled Ninjutsu: The Art of Invisibility, we find on page 78 the following observation:

“Most townspeople and many warriors believed the ninja to be sorcerers, or magicians who gained mastery over nature. Their occult powers were spoken of in quiet, frightened whispers, and their presence struck terror into the bravest of hearts….Yet it was the ninja’s personal resourcefulness, his dedication to his craft, his quick wittedness, and his remarkable physical toughness that made him appear to be super-human.”

Although many people in the world believe that the art of ninjutsu has been lost to the memories of those who lived in antiquity, the tradition still continues on in the work of Dr. Masaaki Hatsumi, who once stated:

“I believe that Ninpo, the higher order of ninjutsu, should be offered to the world as a guiding influence for all martial artists. The physical and spiritual survival methods eventually immortalized by Japan’s ninja were in fact one of the sources of Japanese martial arts. Without complete and total training in all aspects of the combative arts, today’s martial artist cannot hope to progress any further than mere proficiency in the limited set of muscular skills that make up his or her training system. Personal enlightenment can only come about through total immersion in the martial tradition as a way of living. By experiencing the confrontation of danger, the transcendence of fear or injury or death, and a working knowledge of individual personal powers and limitations, the practitioner of ninjutsu can gain the strength and invincibility that permit enjoyment of the flowers moving in the wind, appreciation of the love of others, and contentment with the presence of peace in society.” 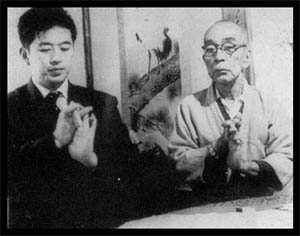 Dr. Masaaki Hatsumi with his teacher, the late Toshitsugu Takamatsu

Dr. Masaaki Hatsumi was born in Noda City, Chiba Prefecture, Japan on December 2, 1931. He is currently the only authority on Ninjutsu and several other martial traditions in the world. In the 1950’s and 1960’s, Dr. Hatsumi studied with Toshitsugu Takamatsu, from whom he inherited the authority and position of Soke (grandmaster) in the following nine martial traditions:

Hatsumi Sensei’s purpose in opening his art to the world is to promote peace and happiness through wisdom. He teaches us to become compassionate human beings. Survival; physical, mental and spiritual, is the prime objective. This begins with self and family, then spreads to the community, country and the world Today the principles and forms of the Ninja are studied under the term Taijutsu. The Bujinkan Dojo was organized in the early 1970’s by Masaaki Hatsumi. The Bujinkan Budo Taijutsu system of martial arts emphasizes natural and relaxed body movement. This martial art is composed of authentic techniques from ancient samurai and ninja combat arts, taught within both their historical contexts as well as within the modern millieu.

Here in New York City, we have the Muzosa Bujinkan Dojo. I got a chance to interview the Head Instructor of Muzosa, also my sensei, the phenomenal Jeff Christian.

Warlock Asylum: For our readers who may not be familiar with who you are, can you give us a little brief introduction about yourself?

Jeff Christian: My name is Jeff Christian, and I’m the head instructor and co-founder of Muzosa Bujinkan Dojo of NYC.

Warlock Asylum: What inspired you to get involved in martial arts? And why Budo Taijutsu, or what is commonly known as Ninjutsu?

Jeff Christian: I first got involved in martial arts when I was about 7 years old. I studied judo on Guam for a couple of years and continued when I moved back to the States, but quit shortly afterward. I just wasn’t good enough to keep up with boys of my age and rank — I was fairly slight, and they were beating the snot out of me. When I was 15 I took Shito-ryu karate, but only for 6 months before the dojo closed down. Shortly after the school closed down, I took my first Bujinkan class at the Dayton Dojo, where Stephen K. Hayes was still teaching. This was in 1983, so it was still the height of the ninja craze. What 15 year old boy doesn’t want to be a ninja, especially when so many people still didn’t know what a ninja was? I was fortunate enough to live in the same town as Hayes, who had written a couple of books about the ninja. It’s odd to think about how Dayton, Ohio was the center of ninjutsu in America. I mean, there were guys who had moved to Dayton for the sole purpose of studying at the Dayton Dojo. It was probably the best place to study ninjutsu in America, and I was lucky to be a part of it.

Warlock Asylum: How has working with this art effected your family and personal life?

Jeff Christian: I think everybody who takes martial arts is affected by it, hopefully in a positive way. Because Bujinkan Budo Taijutsu has so many different approaches to conflict, it really changes how you approach problem solving. You learn to be flexible in your thinking and in your responses, so that you can actively progress forward in your life, rather than having reflexive reactions that may not be productive toward your goals and your relationships.

Warlock Asylum:  As an occultist I must ask this question, since some forms of martial arts are actually considered an “occult art” in itself, how has Budo Taijutsu affected you spiritually and magically? Please share experiences

Jeff Christian: Budo taijutsu has opened up my perception of what is possible. Even when you’ve become more experienced in the art, you can see your teachers do things that seem impossible. Arthur C. Clarke’s adage that advanced technology seems like magic to less developed cultures holds true for martial arts as well. When someone is much more advanced than you, a part of your mind can’t help but think that what you’re seeing is impossible, bordering on magical. The “sakki” test for 5th degree belt black in the Bujinkan is the classic example, where the student has to feel the attacker’s “killer intent” without seeing what’s happening. For me, having such experiences makes it easier for me to say, “Well, maybe these other things are possible as well.” Spiritual and magical abilities may just be a manifestation of my own ignorance, rather than an absolute impossibility.

Warlock Asylum:  You have acquired quite a reputation not only as a martial artist, but as an instructor, why did you get involved in teaching this art?

Jeff Christian:  Becoming a teacher in this art has more to do just sticking around long enough! I’ve seen people who I thought had absolutely no feel for martial arts at all — let alone this art — develop over the years into not only excellent practitioners, but very good instructors. And at some point, practitioners need to teach in order to learn what they really know, versus what they think they know. Teaching is a way of organizing your own knowledge and exploring them through your own vocabulary and experience, which is essential if the art is to become your own. So teaching is a natural progression for any student. Practitioners who are more intent upon becoming teachers rather than learning can end up in the wrong place, I think.

Warlock Asylum: In your own opinion what are the goals and purposes of Budo Taijutsu?

Jeff Christian: The nice thing about Budo Taijutsu is that people can have different goals and reasons for training. Everybody starts off for their own reasons, but it’s up to the instructor to help guide students, so that people can figure out if this art is ultimately compatible with what they feel like their goals are. Some people figure it out right away, one way or another. Some people decide after years of training that this art doesn’t work for what they want. And some people have been so deeply affected by the art that it’s changed how they perceive the world and their lives. In that sense, Budo Taijutsu is a useful paradigm

Warlock Asylum: What advice would you give to students of the art, like myself, and those who are interested in Budo Taijutsu?

Jeff Christian: My advice to students is to keep an open mind about what you’re learning, but also to be relentless about the integrity of the knowledge that you’re receiving. Some things won’t make sense because we don’t understand enough, and some things don’t make sense because the knowledge is flawed or incomplete. I think good instructors should be open to challenging questions coming from their students — which is different from students simply being challenging in a disrespectful way. And like any else new that you’re studying, it requires practice, practice, practice. Getting specific advice from your teacher and your fellow students can be very helpful.

Warlock Asylum: Based on your experience as a teacher, where do you see Budo Taijutsu in the next 10 years and its progression in America?

Jeff Christian: It’s pretty hard to say what will happen in the next 10 years, because it all depends on what Hatsumi sensei decides. I try not to think too much about the future of the Bujinkan, because I have absolutely no control over that. I can only work on my own training and help my students in their own path. Beyond that, I don’t have the faintest idea.

I would like to personally thank Sensei Jeff Christian for taking the time to answer a few questions for our readership here on the blog page. I can personally say that I hAve been learning some truly amazing things since I have been a member of Muzosa Bujinkan Dojo of New York City. I recommend  to anyone living in the tri-state area to stop by and attend a class. Readers can acquire more information by visiting the following website: http://www.muzosa.com/ Stay Blessed!

‹ The New Ankhara Makes Her Debut in Art of Ninzuwu Part 18: Yukionna the Snow Witch
A New Look At Rinkiohen-Do and the Green Lion Martial Arts Academy ›

This site uses Akismet to reduce spam. Learn how your comment data is processed.